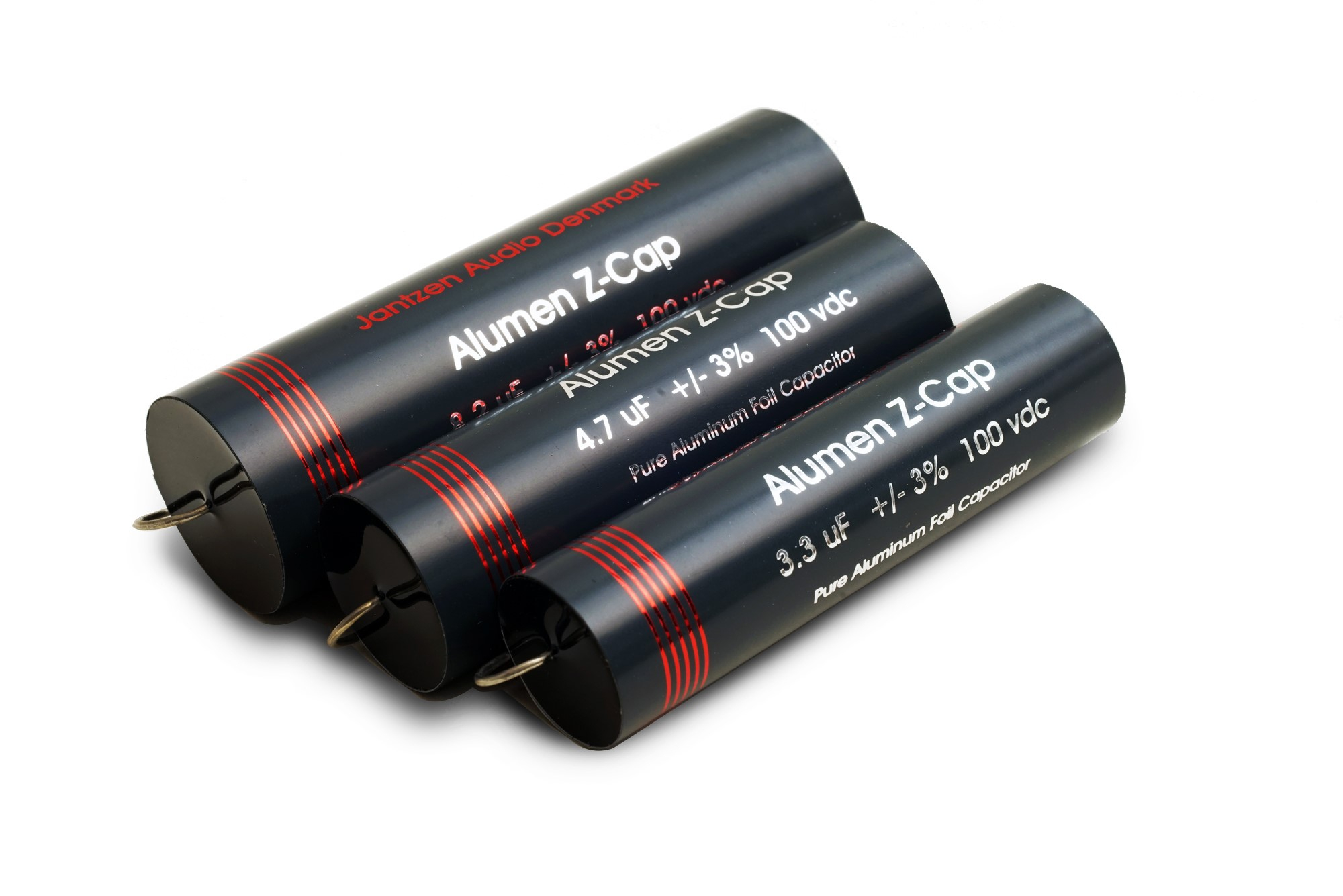 The Alumen Z-Cap is the newest addition to our line of high-end audio capacitors.

The Alumen Z-Cap was especially designed for the tweeter and mid-section of crossovers for passive hi-fi speakers.

The improved transparency performance of this new cap is on the same high level as our SilverGold Z-Cap, but with a slightly softer tonal presence and less  brightness / sheene / glare in comparison.

The Alumen Z-Cap will offer a more “neutral” presentation in the overall sound in certain crossover designs, and by “neutral” we refer to the focus will be shifted from what can be a somewhat overemphasized brightness from a Super PP cap, being replaced with a more even balance between the depth of the midrange and the presence of the tweeter.

Most amplifiers are delivered with either standard type MKP (PP foil) capacitors or electrolytic capacitors. For upgrading the coupling capacitors in amplifiers, we highly recommend choosing our Superior, Silver, SilverGold or Alumen Z-Caps.

Be mindful when using Alumen Z-Caps for amplifier application. They have a voltage rating of 100 VDC and can be used as coupling capacitors in transistor amps, where the voltage rating is sufficient.

EDITED REVIEW BY TROELS GRAVESEN (LOUDSPEAKER DESIGNER) “…From Jantzen Audio I requested Alumen Z-Caps to evaluate the performance against the two types of capacitors I've been using for years and know very, very well. Within the super-cap range there are flavors to pic depending on metal used for metallization, alu, silver, and silver-gold. The thing is that even super-caps can add a certain colouration to the sound - although miniscule. Super-caps can almost make music sound just a little bit better than life by adding a certain sheen/glair/brightness/radiance to particularly high frequency content. My prototype 3-way having a point of crossover between mid and tweeter at 1.6 kHz is particularly well suited for demonstrating the effect. I found a very forward sounding saxophone on the Pawnshop recording and swapping between Sup-Z, Silver-Gold and Alumen-Z was quite a surprise. Suddenly the sheen was gone and the overall sound image appeared darker. "Darker" is mostly a good sign when you know frequency response is exactly the same and yet, the sound becomes darker without any smear of detail. You start listening to treble rather than tweeter or tweeter + capacitor or whatever adds its sonic signature. This sheen also sometimes adds to the perceived sense of detail and transparency. The Alumen-Z appear to present a more credible overtone structure to instruments and voices and most importantly, not diminishing the level of transparency. My next move was to replace the Silver/Golds in my ATS-4 with the Alumen-Z. The result here was more subtle, probably due to a higher point of crossover, but still noticeable. Listening through a wide range of recordings it struck me that the perceived sense of depth from the midrange was noticeably improved. I interpret this phenomenon as a matter of change of attention. If any driver or component adds some signature to the sound image it may catch our attention and distract us from other aspects of the presentation. The midrange transparency is there as before, because nothing has changed, but all of a sudden we notice its quality because we're not distracted by some other (mis-) information….” Page 3 of 4 Source: http://www.troelsgravesen.dk/Alumen_Z-Cap.htm PRODUCT REVIEWS EDITED REVIEW BY HUMBLE HOMEMADE HIFI “…. Jantzen Audio seem to know what they are doing with this Alumen Z-Cap. They have created a modern day capacitor that doesn't sound "modern". This might be a strange way of describing what I mean, but to me it combines the best of both "modern" and "vintage" worlds. The music flows, has a smooth presentation and at the same time it is high in contrast. The Alumen Z-Cap has high resolution in a natural way, it is without glare that you usually get with some of those "high-end" capacitors. There is an addictive balance between warmth on one side and and openness on the other. Tonally speaking it is a very clean, detailed and open sounding with lots of contrast, great depth and heaps of micro detail. The Jantzen Audio Alumen Z-Cap is also open and also has lots of contrast but does it with a warmish undertone. The Jantzen maintains coherency under all conditions. The combination of and balance between these characters is spot on and make the Jantzen Audio Alumen Z-Caps create music with a great sense of realism. Comparing the Alumen Z-Cap to other aluminium foil capacitors, you will understand what I mean with a modern day capacitor that doesn't sound "modern". In direct comparison (to other aluminum foil capacitors) the Alumen Z-Cap is more neutral (as you might of guessed by now, I like my music to sound neutral). Taking all this into consideration, the Jantzen Audio Alumen Z-Cap is an absolute bargain! I have added it to my favorites list…” Verdict score: 11,5